I’ve been trawling the blog archives and found this. You know I love a story… 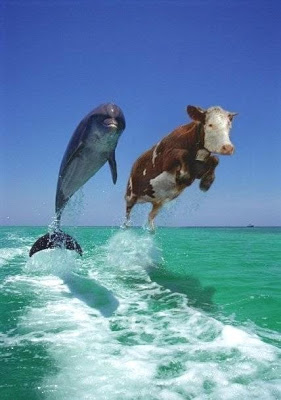 Once upon a time there was a cow. She lived on a farm with a hundred other cows but she was bored. She was tired of walking in the mud and following along in line behind the other cows.

One day as she stood in the paddock chewing her cud, she looked around. There in the branches of the big, dead tree were some seagulls. These same seagulls visited every day, flying in to land nearby.

The cow was jealous of them and wished that she could fly just like them. How great it would be to take to the sky and be free, away from the heavy mud. The mud weighed her down like wet cement. Just imagine the things she could do if she could be free.

One morning the cow decided that she was not going to follow the others any longer. She was going to find the seagulls and learn to fly. She crept out of the paddock through the broken fence and followed her nose to the coast. The ground changed under her hoofs as she walked. Gone was the mud and instead she felt sand. This was unnerving but exciting and spurred her further on.

Eventually she came to the beach where the seagulls played and she lumbered slowly up to them. “Please teach me to fly like you do. I want to be free.” The seagulls looked at each other and squawked with laughter. “You can’t fly like us because you are a cow. Cows can’t fly. You don’t even have wings.”

The poor cow was very disappointed. She had hoped so much that someone would help her. It wasn’t her fault that she didn’t have wings. She walked sadly off to sit on the beach, watch the ocean and mope.

He encouraged the cow to enter the water. She wasn’t used to the waves or the pull of the current beneath her. “Just trust me. Trust yourself.” said the dolphin. She did so and, with the dolphin, swam further and further away from the beach. “Can you feel the waves?”the dolphin asked. “Yes” mooed the cow in wonder. “They are really pushing me around.” “Now just let go”, said the dolphin. “Just picture yourself flying! Feel the waves pushing you and go for it.”

Cow closed her eyes and imagined leaping into the air. She could feel the wind whistling around her ears. “I can do it.”, she said to herself. “I can do it!”

The cow took the power of the wave and sailed up and out of the sea. “Open your eyes!” She looked and could see the sea beneath her. She felt the breeze on her udders. She felt the dolphin flying beside her. “I am free!”, she thought. “When I want to fly I can really do it”

The dolphin smiled and said “Never listen to those who tell you can’t do it. You don’t need wings to fly.”

So next time you go to the beach, keep your eyes open for the cow that flies. She might teach you to fly too.