What’s wrong with being a tall poppy?

Since I chose the poppy as my logo and started out in business with the intention of helping people become tall poppies I’ve had people telling me I shouldn’t do it.  I shouldn’t use the tall poppy metaphor.

Yep, the poppy choppers have been out in full force and I’m not even a tall poppy.  I’m a tall poppy maker.

I remember one “expert” marketer emailing me and telling me that the concept would put people off.  She said that clients would be too scared to work with me because “we all know what happens to tall poppies in Australia.” 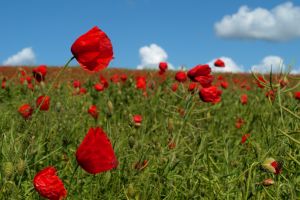 Could you honestly tell me that while you are lying on your death bed, you would rather look back over a life that was beige than relive the time when you were flaming scarlet and shaking the world?

I know which I would rather do.

Am I wrong?  Am I wrong in wanting to make tall poppies out of you?

In all honesty your answer won’t change what I am doing.  There is no other way for me to operate.  It’s something I can’t change about myself.

But I would like to know what you think.

Does the idea of becoming a tall poppy scare you?