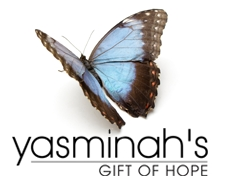 Yasminah’s Gift of Hope is delighted to announce the appointment of Haley Bracken as their first official charity Ambassador. Haley Bracken, the wife of Australian cricketer Nathan Bracken, is a star in her own right and currently reigning as Mrs International Australia.

Yasminah’s Gift of Hope will celebrate its second birthday as a registered charity on 26th May. The charity was founded to support families who experience the miscarriage, premature birth, neonatal loss, stillbirth or infant loss of their child or diagnosis of a congenital abnormality during pregnancy. One in four pregnancies ends in loss and premature birth is the leading cause of new-born deaths. In the two years since it was founded the charity has provided over 6000 Gifts Of Hope to families and many more with support.

Founder, Mrs Rebecca Aziz who is also Co Vice President of the National Premmie Foundation, says “We are very excited that Haley Bracken has accepted the role of Ambassador for Yasminah’s Gift of Hope. Haley has experienced premature birth and knows the struggle that parents go through at that time. With her help and her passion for the cause, we can reach many more families who would otherwise have to suffer through this difficult time with little or no support.”

Mrs Aziz is the mother of Yasminah who was stillborn and of twins who were born prematurely. Her experiences made her realise how important it is to have something by which to remember each child and their special birth journey. The tragedy is that some families have nothing: no photos, no record, nothing to hold.

Yasminah’s Gift of Hope Journals allows families to keep ultrasound images, photos, cot cards, arm bands, and foot and hand prints as a cherished keepsake of a precious life. The journals are donated to hospitals, neonatal intensive care wards and to families struggling with loss or the worry of premature births.

As Ambassador, Haley Bracken will promote awareness of the high rate of premature and stillbirths in this country and the ongoing support and understanding available from Yasminah’s Gift of Hope.

The charity has big plans.

• It is launching an awareness video which features Haley Bracken via their YouTube channel .
• It intends to refurbish Westmead Public Hospital Neonatal Intensive Care Unit (NICU) in  Sydney over the coming months.
• Will hold its first Fundraising Ball on August 11th with Haley Bracken as MC and Ambassador.

Yasminah’s Gift of Hope has achieved a lot in two short years and with Haley Bracken as Ambassador, intends to achieve a lot more.

For more information about Yasminah’s Gift of Hope please visit the website.